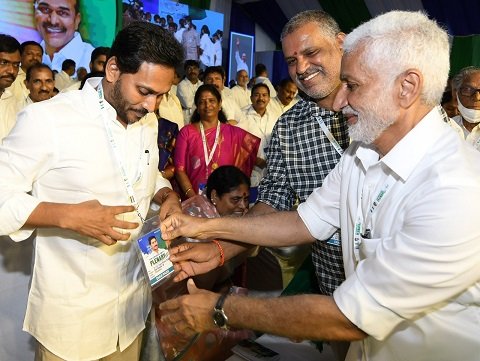 Guntur, Andhra Pradesh, July 2022: Three years after the landslide victory, which brought YSRCP to power, the party holding its two-day plenary meet in Guntur. The YSRCP president and Chief Minister Jagan Mohan Reddy delivered the inaugural address by highlighting that 95% of promises from the manifesto were fulfilled, with the ministers and senior leaders present along with the lakhs of party cadre.

Addressing the people who travelled from different parts of the state, Jagan Mohan Reddy spoke about the 13-year journey of YSRCP, where the leaders and cadres gave blood and sweat to the party. “I salute the people of Andhra Pradesh and our cadre for their support. We came across many hurdles in the last 13 years of our journey, which resulted in a landslide victory three years ago,” said AP CM and YSRCP President Jagan Mohan Reddy.

Jagan Mohan Reddy reiterated that it was the blessing of the people of Andhra Pradesh, which made the party and government work towards development, welfare, and social justice. The people have stood behind the party as a strong pillar and led us to a landslide victory in the 2019 general elections, said Jagan Mohan Reddy.

“We have fulfilled 95% of promises on our manifesto without discrimination of caste, creed, and religion. Our government has shown the door for change, development, and prosperity for the state,” said Jagan Mohan Reddy.

“I wish that resolutions, discussions, and speeches in the plenary will be useful for all of us,” Jagan Mohan Reddy signed off.

The two-day plenary event attracted lakhs of people, and they have arranged a blood donation camp, medical camp, and registration desks for the people attending the event.