GOA, India – 29 November 2022 – Prime Video, India’s most-loved entertainment destination, successfully concluded its participation at the prestigious 53rd International Film Festival of India (IFFI), held in Goa. For the second year in a row, Prime Video’s presence at IFFI, Asia’s oldest and India’s most iconic international film festival, was marked with high-octane events. Attuned to the festival’s objective of promoting and nurturing of content and creators from across the world, Prime Video participated in specially-curated initiatives at the event, including an exclusive showcase of its upcoming Amazon Original series Vadhandhi – The Fable of Velonie, an enlightening session on Enhancing Storytelling through Technology, which was led by the creators and VFX experts of action-adventure film Ram Setu, Prime Video’s theatrical co-production debut, and an insightful masterclass with Pankaj Tripathi on Craft of Cinema – Character Development, helmed by Gaurav Gandhi, Vice President, Prime Video, India. Prime Video also set up an elaborate tech pavilion that offered visitors a unique chance to experience the reel magic created by VFX in the film Ram Setu.

As the world-renowned film festival draws to a close, it has not only recognized the pivotal role that video streaming services are playing in delivering entertainment across India and the world, it has also initiated many new dialogues between talent, film makers, creative partners, and the entertainment community that are sure to give a fillip to India’s creative economy.

Snapshots of Amazon Prime Video’s participation at the 53rd IFFI

On November 21, 2022, a highly engaging and insightful masterclass session “The Craft of Cinema – Character Development” saw Pankaj Tripathi, one of the most talented and acclaimed actors in the Indian entertainment today, in conversation with Gaurav Gandhi, Vice President, Prime Video, India. In his signature candid yet down-to-earth style of conversing, Pankaj Tripathi gave the audience present at the masterclass an unvarnished look into his life – his reasons behind choosing acting as a career option, struggles that defined his career, his first break as an actor, his preferred acting techniques, and much more. He talked about how his character Kaleen Bhaiya, from the Amazon Original series Mirzapur, has today become a household name and his trademark gestures in the show has generated memes indicating viewer interest in all aspects of the character. “I am a student who is still learning” is how Pankaj Tripathi described his journey in the entertainment industry.

II – A highly engaging session on Enhancing Storytelling Through Technology

Gaurav Gandhi, Vice President, of Prime Video India kicked off the session with an enlightening opening address, talking about how technology is increasingly becoming a key enabler within Indian filmmaking – across content creation and distribution to consumption. The movie’s creators, director Abhishek Sharma and producer Vikram Malhotra, Founder & CEO of Abundantia Entertainment, then delved into the challenges of filming a movie during the pandemic, and the pivotal role technology played in not only bringing out the true essence of the story but also how various techniques were used to create never-seen-before worlds and recreate real worlds on screen. Taking the audience into the world of VFX, the VFX experts – Naveen Paul, co-founder and creative head of NY VFXWAALA, and Parthsarathi Sethuraman Iyer, creative director of Shock & Awe Films – showed how technology was used to turn a conventional action adventure into a visual marvel. They spoke on their journey of creating three key environments in the movie – scenes of Sri Lanka, Afghanistan and the underwater sequences, bringing them to life, all the while sitting in front of the computer!

On November 27th, Prime Video presented an exclusive showcase of the highly anticipated Amazon Original Series Vadhandhi – The Fable of Velonie. The session kicked off with a trailer of this edge-of-the-seat, Tamil crime thriller, leaving the audience highly intrigued. This was followed by a highly interactive Q&A session with Aparna Purohit, Head of India Originals, Prime Video, and the cast and creators of the series – Creative Producers Pushkar & Gayatri; Writer, Director & Creator Andrew Louis; Lead Actor SJ Suryah and Debutante Actor Sanjana. The session was moderated by Rohini Ramanathan. A special 30-minute preview was then screened for the audience, that took them into the world of Vadhandhi – The Fable of Velonie.

Participating in the Film Technology Exhibition that was curated by Film and Television Institute of India, Pune, at IFFI, Prime Video set up a tech pavilion for the duration of the festival. The stall showcased the magic that new-age technologies such as VFX can bring into Indian cinema. VFX technology has been extensively used in Prime Video’s theatrical co-production debut Ram Setu, that released theatrically in October. The pavilion showcased the three major environments recreated using VFX technology in Ram Setu – the scenes of Sri Lanka, Afghanistan, and the breathtaking underwater landscapes. Doing so, the visitors enjoyed the ‘drawing board to reel’ journey of these three environments. Turning up the immersive experience quotient even further, the exosuit used in the film was also up on display for visitors to view and experience the world of Ram Setu. 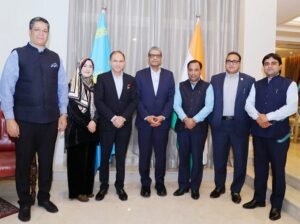 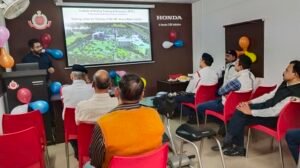