Chennai, August 2022: Colors Tamil, a meaningful entertainment channel, is excited to bring the World Television Premiere of Hey Sinamika, starring Dulquer Salman, Aditi Rao Hydari and Kajal Aggarwal, this Sunday, 28th August, at 2 PM. The light-hearted romantic comedy revolves around a wife who is tired of her husband’s overbearing affection and tries to find ways to get away from him. Tune in to Colors Tamil to see if she is able to banish her husband or if love finds a way to reconnect the two once again.

Traversing the life of Mouna (played by Aditi Rao Hydari) who falls head over heels in love with Yazhan (Dulquer Salman), the film focuses on the two years after their marriage, where Mouna is tired of Yazhan’s excessively doting nature. She decides to take up a project in Pondicherry to get away from him for a year. But her efforts fail as Yazhan turns up there as well. Running out of ways to get rid of him, she ends up meeting Mazharvizhi (played by Kajal Aggarwal) and schemes with her to make Yazhan fall in love with the latter, setting up the grounds for a divorce. Is this the end for Mouna and Yazhan? Or does he end up falling for Mazharvizhi?

Commenting on the WTP, director Brinda said, “I am extremely thrilled that my debut film Hey Sinamika is set for a World Television Premiere on Colors Tamil, with whom I have been associated for the longest time. It feels like a homecoming. The title of the film is a tribute to my guru Mani Ratnam’s film Oh Kadhal Kanmani and it sums up the plot perfectly. All of us had tirelessly worked for the film to make it an entertaining watch and I am positive that it will garner equal love and appreciation on the small screens too, like it had in theatres. Families, especially new couples, will relate to the film.”

Building on the same theme, Dulquer Salman commented, “Hey Sinamika is one of the films that will always remain close to my heart since director Brinda chose me to be a part of her debut film. I have played light-hearted characters in my previous projects too, but to play an excessively doting husband without becoming extremely annoying for the audiences was a tough job. I had to strike a balance between being naive while being slightly irritating. I owe this to director Brinda for moulding my character and my co-actors Aditi and Kajal for supporting Yazhan equally. With the World Television Premiere, I am sure that viewers are going to experience loads of fun and sentiments, this weekend.”

Relax on your sofas and get hooked to your television screens while discovering who among Yazhan, Mouna and Mazharvizhi gets to have their happy ending on Sunday, 28th August, at 2PM. 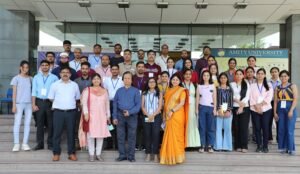 Next post Hands on Training on Materials Characterizations, Lipidomics and Proteomics Techniques
Rekha Nair
22 hours Ago

India, February 2023: Chocolates and love have stayed generations, a match unlike any other. Terribly Tiny Tales (TTT), India’s celebrated...

R CITY paid tribute to the loved and respected duo Shri Shankar & Shri Shambhu as it hosted the ‘Sarvashri...

National; 7th February 2023: No matter how you plan on celebrating Valentine’s Day & month, as long as it’s filled...

India, February 2023: PVR Cinemas, the largest and the most premium film exhibition company in India, announced the opening of...

R CITY, Mumbai’s iconic shopping and entertainment destination presented ‘Ballimaaraan’ this weekend to a houseful audience. ‘Ballimaaraan’ is a band...