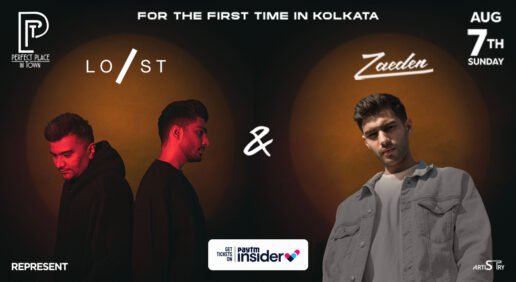 India-wide release, 21st July 2022: One of India’s biggest heartthrobs, Zaeden – whose name is synonymous with India’s thriving pop music circuit – is on his ‘A to Zae Tour’ from 9th July to 29th July. This multi-city tour kickstarted with its first show in Chandigarh and will be brought to 5 more cities of his enthusiastic fans by one of the largest experiential event curators in the country SteppinOut and the leading entertainment platform Paytm Insider.

Sahil Sharma, a.k.a., Zaeden’s career began at the age of 14, when he mixed tapes of dance music releases and distributed them among his friends, leading him to release his first single titled Land of Lords in 2014. His body of work has been experiential and up to the minute, putting him at the forefront of the Indian pop revolution. His debut album, Genesis 1:1, released in 2021, has grossed over 40 million streams. Besides, his live acts include him performing at the grand ‘Tomorrowland’ stage and ‘Ushuaïa,’ making him one of the first Indians to take this stage. In 2016, he also opened for Justin Beiber’s Purpose Tour in Mumbai.

Now, by bringing forth the A to Zae Tour, the sensational singer is back on stage to perform his hit tracks and fan favorites, including his chartbuster Tere Bina. Along with Zaeden’s high-octane performance, the tour promises a refreshingly splendid sonic experience for all his fans that will surely leave them spellbound.

Varun Khare, Business head, Paytm Insider said, “Zaeden is one of the most talented singers of this generation and his music has touched the hearts of thousands. With this in mind, we have gone the extra mile to make sure his fans have the best time at the A to Zae Tour and are able to share that inexplicable deep connection that is perhaps only possible during live performances – making for a great and fulfilling experience.”

Sahil Sharma, a.k.a., Zaeden said “I feel like I’ve been discovering different layers with every tour, like every tour is like a rite of passage to a completely different persona that I take on stage. ‘A to Zae’ is special because the Zaeden that takes the stage has zero inhibitions and is full of joy. He loves the fans and takes them on a journey along with him and is all about leaving with a full heart and smiles on everyone’s face.”

The A to Zae tour will cover the following cities starting with:-

● Jaipur on July 23rd at Sambre

● Bangalore on July 24th at Lalit Ashok and