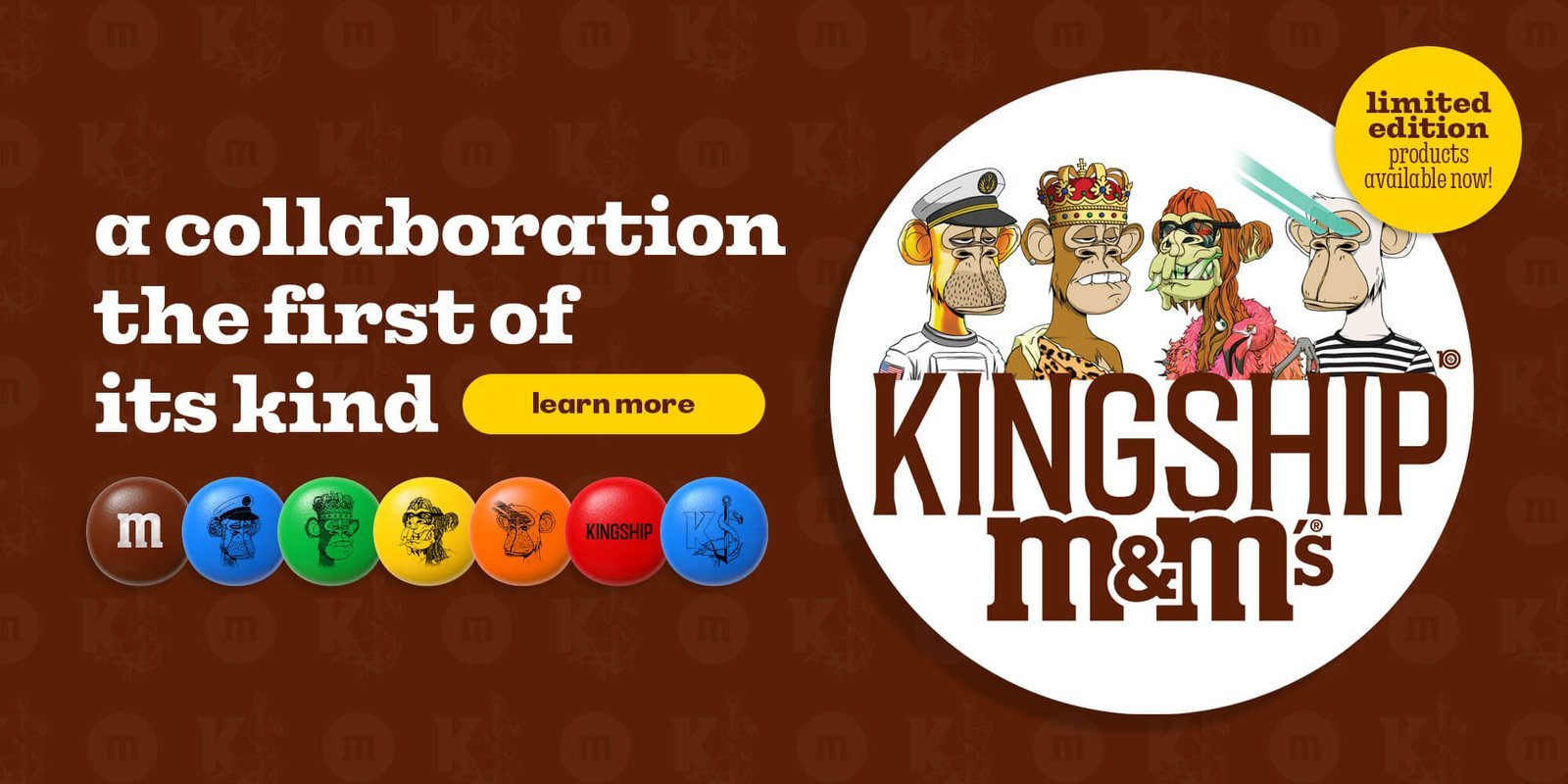 The fundamental inspiration for this first-of-its-kind collaboration with M&M’S is rooted in rock ‘n’ roll lore and legend. For decades, rock bands notoriously insisted on tour riders to satisfy talent requests for specific backstage beverages, snacks and accommodations. Mars’ iconic candies – including world famous M&M’S, have been included in some of the most discerning requests from some of rock n’ roll’s most illustrious legends.

Music critics and operations experts have debated the rationale for decades – was it rock n’ roll extravagance? Or were the clauses a brilliant way for artists to quickly check if they were playing a buttoned-up venue with detail-oriented management?

In all cases, M&M’S were involved and necessary accessories to some of the greatest moments in rock history. KINGSHIP — Captain, KING, Arnell and Hud — are seriously smart and of discerning taste, making sure to request bowls of colorful M&M’S within their precious show rider. But were they checking to see if the venue can follow directions? Or did they just need the taste of delicious morsels of fun ahead of their concert?

These physical collectible boxes have been created for fans of both KINGSHIP and M&M’S and are only available for a limited time. Just 4000 have been created in total: The Gold edition, the rarest version, comes in a white and gold foil gift box and includes custom printed candies with KINGSHIP group members Captain, KING, Arnell and Hud in individually numbered boxes from 1 to 100. M&M’S will also produce only 3,900 exclusive celebratory gift boxes in Brown. Additionally, there will be 6,000 gift jars of the candies, available TODAY to fans in the U.S. for a limited time at https://mms.com/kingship.

Holders of KINGSHIP Key Card NFTs were the first to know about this exclusive collaboration and were given an early opportunity to access the products on mms.com.

“Consumers’ expectations for what they want from their favorite brands has shifted, and at Mars, we know we need to be more innovative than ever with such a culturally famous brand like M&M’S,” said Jane Hwang, Global Vice President at Mars Wrigley. “We’re excited to continue our Mars foray into the metaverse through this partnership with 10:22PM and KINGSHIP, as a way to engage our fans in a new and exciting space.”

“KINGSHIP is a group dedicated to the art of storytelling, so it was a great opportunity for us to both pay homage to rock’n’roll history, and one of the greatest bands of all time, but also create a unique fan experience for those that have joined this community at the start of their journey,” said Celine Joshua, founder of 10:22PM and the creator of KINGSHIP. “We are grateful to Mars and team at M&M’S for this incredible partnership to help introduce KINGSHIP and NFT culture to the masses, alongside M&M’S, a true icon of pop culture.”

In one of the most well-known tour rider requests, a rock band asked venue operators to provide a bowl of M&M’S with a certain candy color removed as a way to check that all of their instructions were followed. But what happened to those missing M&M’S? At last, that mystery has been solved. KINGSHIP has all of them.

As KINGSHIP grew in stature and began playing larger venues, Hud convinced the rest of the group to join him during the downtime between sound check and the show: A search through the labyrinthine backstage areas of each venue for these legendary M&M’S to make each concert sweeter. They found several crates of M&M’S in a broom closet at one of New York’s most historic arenas, a buried cache at a rustic Amphitheater in Colorado and a few strays in the Queen’s Royal box in London. The members of KINGSHIP knew the key to living in the present is inclusion and bringing people of all backgrounds together. So, they resisted the temptation to consume the candy and instead united all the colors of the M&M’S family. The result of this incredible feat of dedication is today’s M&M’S collaboration — with KINGSHIP becoming the first Bored Ape characters to do so.

In addition, M&M’S will play a key role in KINGSHIP’s story, with the group traveling to a mysterious island stacked with what appears to be boulders that are later revealed to be a sky-high pile of M&M’S in all six colors.

Since launching in November, the KINGSHIP team has quickly grown to include celebrity animator Jack Lanza, Grammy Award-winning music producers and well-respected NFT collector Jimmy McNelis, a.k.a. J1mmy.eth. KINGSHIP, whose Bored Ape characters include rare Golden Fur and Blue Beams Apes, was created by Celine Joshua, who recruited the members of the group from McNelis. In February, 10:22PM announced Manager Noët All (Bored Ape #5537) as KINGSHIP’s manager.

Last month, KINGSHIP sold out their entire collection of 5,000 access-enabled Key Cards in the form of non-fungible tokens (NFTs). The Key Cards sold out 24 hours after the start of the mint on Thursday, July 14. The collection ranked No. 1 on OpenSea’s Music Chart and ranked as the marketplace’s No. 1 Trending NFT collection across all categories on release day. As of today, KINGSHIP ranks #1 on OpenSea’s Music NFT chart.

The collectible Key Cards feature different members of KINGSHIP and contain unique attributes, some more rare than others. In addition to membership to the group’s virtual world, located on an island far away from the swamp where Captain, KING, Arnell and Hud were born, the Key Cards will also unlock exclusive access to music, content, products, and a token-gated community. Only Key Card holders can access a special token-gated channel recently launched in the group’s Discord.

For more information on the story behind KINGSHIP’s rider and to learn more about the group, visit KINGSHIP.io.