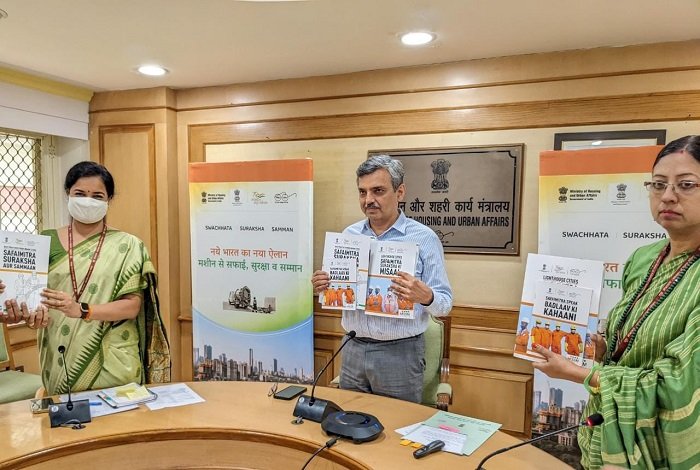 August 2022, New Delhi: Today, Urban India has recommitted itself towards ensuring the safety, dignity, and security of all sanitation workers (SafaiMitras). For the first time, 500 cities across India have declared themselves as ‘SafaiMitra Surakshit Shehar’. In doing so, they have established that the cities are able to achieve adequacy in terms of institutional capacity, manpower and equipment norms as stipulated by MoHUA and are providing safe working conditions for SafaiMitras. The ‘SafaiMitra Surakshit Shehar’ declaration done by 500 cities aligns with Swachh Bharat Mission-Urban’s longstanding goal of promoting sustainable sanitation practices and acting as a catalyst for the transformation of every ‘manhole’ into a ‘machine hole’.

Congratulating states and cities for their efforts, Mr. Joshi and Mr. Subrahmanyam highlighted the need for all cities and States to remain committed to the cause of ‘SafaiMitra Suraksha’. To provide impetus to the ongoing efforts towards mechanization and safety of workers, both Ministries jointly launched ‘NAMASTE’ (National Action for Mechanized Sanitation Ecosystem) Scheme to enhance occupational safety, improved access to safety gears and machines, provide skilled wage opportunities, and focus on continuous capacity building while breaking the generations of drudgery enforced on manual sewer cleaners earlier.

She said, “The Government is committed to ensuring ‘Zero Fatalitites in Sanitation Work’. On World Toilet Day in 2019, MoHUA launched the ‘SafaiMitra Suraksha Challenge’ through which we identified 100 Lighthouse cities that were well equipped in terms of sanitation infrastructure and facilities. MoHUA also provided a protocol for ‘SafaiMitra Surakshit Shehar’. States have set up Responsible Sanitation Authorities (RSAs) & Emergency Response Sanitation Units (ESRUs) at the district level and are now prioritizing training and capacity building of SafaiMitras. It has taken 75 years for us to come to this juncture, but any task started well is bound to achieve its goal. MoHUA is committed to ensure that all Indian cities declare themselves as ‘SafaiMitra Surkashit’ by March 2024.”

The cities of Jamshedpur, Dewas, Tirupati, Bhubaneswar presented their experiences on making their cities ‘SafaiMitra Surakshit’. Commissioners of Municipal Corporations, along with SafaiMitras from these cities also attended the webinar. These SafaiMitras shared their on-ground experience and how working conditions have improved in their respective cities, commending their respective Municipal Corporations for creating a safe working ecosystem for the SafaiMitras.